A recent mix I produced for Free City Radio. It’s comprised of some recent favorites from the past year or so.

Bissonnette’s debut album for 12k will be available on September 18th.

Wayfinding is Christopher Bissonnette’s sixth solo studio release and his first, of hopefully many, for 12k. The album embodies an evolution of Bissonnette’s work, moving from an exclusively synth-based series of explorations to an amalgam of electronics and acoustic methods. Each track seeks to find grandeur on a diminutive scale. Bissonnette’s focus has shifted from sweeping pastoral drones to introspective passages with delicate melody and elusive harmonies interlaced with studio and field recordings. This minute scale is also reflected in a photographic series that studies the domestic landscape of home. The sequence of images transforms the banality and insignificance of the familial interior into expansive vistas and bucolic panoramas. Wayfinding is Bissonnette’s most intimate and gauzy work to date and executed with beautiful restraint.

@brainwashedcom podcast this week has a preview of my new release on 12k. It’s the last track of the podcast but listen to the whole thing. Plenty of good tracks in the mix. 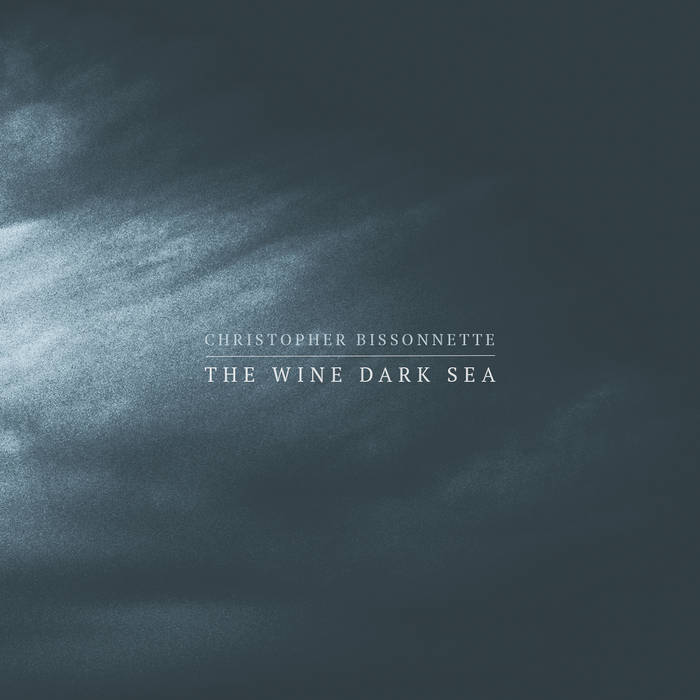 The Wine Dark Sea is Bissonnette’s fifth solo studio album. The album’s title is derived from the writings of Homer, where he oft referred to a rough and stormy sea as “wine-dark”. Homer’s descriptions of colour are devoid of any reference to the colour blue. And any suggested meaning in his description of the sea point to the colour red. This apparent contradiction has brought much speculation about the significance and understanding of colour in ancient Greece. Keeping with the motif of colour, track titles on the album are based on references from contemporary artists and their insights on colour, form and implied meaning.

The album represents a shift for Bissonnette’s work, moving from an exclusively synth-based series of explorations to a hybrid of electronic and acoustic methods. The result is a rolling and slow-moving tide of tones and undulations. The textures are in some passages soft and mollifying but fluently shift to moments of tension and unease. The Wine Dark Sea is an aural allegory to sound and colour and our tenuous understanding of abstract meaning.

Christopher Bissonnette’s first album for Kranky in seven years is fairly different from the more patient, pastoral ambient terrain he’s traversed on past releases. InsteadEssays in Idleness finds Bissonnette limiting his explorations to a single homemade modular synthesizer, which at first seemed slightly disappointing of a prospect to me. Given that modular synthesis is so en vogue at the moment as a sort of reaction against completely software-based electronic music, I don’t know that it’s as compelling or daring a move to make as it may have seemed a few years earlier for some of his peers. But listening to the album, my reservations about Bissonnette joining the modular synthesis bandwagon are for naught; while it’s a different animal from his previous repertoire, I find most of the album to be quite good.

There are times when Bissonnette employs a rather typical octave toggle to his monophonic leads, abruptly toggling from one octave to the next as notes cycle through. It’s the sort of thing that seems like modular synthesis 101, recalling the monophonic Moog sounds of Boards of Canada and conjuring up somewhat cliched images of sun-faded 70s camcorder footage. But Bissonnette only occasionally indulges such sounds here, instead often lingering in a more nebulous field of overtones and oscillating drones. The closest comparison I can draw is some of the recent synth output of M. Geddes Gengras, because both composers seem to be pulling inspiration from the same lonely and introverted places.

The delayed, sprinkling octave shifts of “A Deplorable Corruption” and “Entanglements” show off Bissonnette’s love of the sometimes arbitrary and abrupt changes in sound attributed to the nature of the synth. But it’s the lead track, “Greenish In Its Light,” that is such a clear standout to me — it’s fragile and luminous, the visual of refracted light in such an intuitive and instinctive way.

I’ve been fortunate enough to be included on some great year end lists.

This album is a bit of an experiment in simplicity for Bissonnette, as he decided to limit himself solely to sounds generated from a synthesizer that he built himself.  While I was initially dismayed to see that such a reliably excellent composer had tossed in his lot with the recent glut of synth-worshippers, I am pleased to report that Christopher has not completely lost his mind and that he is still making music that is distinctively his own.  As a complete album, Essays does not quite stand with Bissonette’s lusher and more varied previous work, but some of the individual pieces are certainly quite good and I always like it when an artist takes an unexpected gamble.

As Kranky are quick to mention in their description of Essays in Idleness, Bissonnette wields his synthesizer a bit differently than most of his contemporaries, choosing to focus primarily on slowly transforming sustained tones.  In that regard, this album makes perfect sense, as Christopher is no stranger at all to droning, drifting ambiance and the right synthesizer can offer some rather amazing possibilities for the real-time textural manipulation of such sounds.  While Bissonnette does not rely particularly heavily on that feature, he certainly manages to score impressively with the opening “Greenish in its Light,” an absolutely beautiful mélange of warm drones, randomized buzzes, and melancholy bloops.

Unfortunately, Christopher then haplessly blunders into one of my personal peeves with “A Deplorable Corruption,” opting for some dated retro-futurist textures that scream “‘70s science program soundtrack.”  That just about derails the album entirely for me, as he seems quite fond of those glistening artificial sounds, repeating them yet again on the following “Entanglements.”  Thankfully, “Delusions” restores some of the lost momentum, gradually evolving from gently buzzing ambiance into something much more complex, quavering, and emotionally resonant.

From then on out, Essays is almost unwaveringly solid, though none of the remaining four songs quite manage to topple “Greenish” as the album’s reigning highlight.  “Missing Chapters,” for example, evokes an otherworldly tableaux of bittersweet loneliness and distant memories, while “Uniformity is Undesirable” dabbles uncomfortably close to those accursed science film textures, but keeps them pleasantly ominous with some well-placed swoops and snarls.  Similarly dated textures dog the weaker “Another Moving Sight,” but it at least boasts an appealing throb and builds to a likable (if a bit understated) crescendo.  Essays then concludes in fine fashion with the sublimely twinkling and blissed-out coda of “Wasting a Little Time.”

All of that adds up to a perfectly likable album, but Essays is definitely a relatively minor and divergent addition to Bissonnette’s discography.  If I were not so predisposed to like Christopher due to his previous work, I probably would not have allowed myself much of a chance to get drawn in beyond “Greenish in its Light.”  However, once I started actively looking for reasons to like Idleness, I certainly found them.  While I think that anyone new to Bissonnette should probably bypass this one, as its very limited palette sacrifices quite a bit of depth and humanity, longtime fans will likely find this to be a pleasant enough detour (and will need to at least hear “Greenish”).  Or they will be absolutely heartbroken that Christopher’s first solo album in seven years is so different from what they were expecting.  It is hard to say.  God, I wish Bissonnette was more prolific.  Damn.

Essays In Idleness, the third album from Canadian composer Christopher Bissonnette, is a refreshing change from the international school of ambient music and its widely held belief that the sweet chirps of birdsong and the serene streams of running water are vital, tonal ingredients to the genre, and therefore help to make ambient music what it is. Essays In Idleness is the result of two years of intense exploration and it is clear that during this period Bissonnette focused on and deepened his understanding of the craft and its relationship with life. The Canadian has dropped the aforementioned kind of ambience – the usual suspects – for a new, synth-led pursuit, a fresh tonal foray, and he never flirts with the idea of returning.

The soul of ambient music should be that of freedom; it shouldn’t feel restricted, but that is perhaps where the genre has, in recent times, found itself, with many ambient musicians intentionally or unintentionally backing the music into a corner with their repetitive, albeit lovely tones. It’s true that ambient music soothes deeply with its beautiful, shimmering showers and serene swells – beautiful, yes, but in danger of being a little predictable.

One of the track titles, ‘Uniformity Is Undesirable’, sums it up; Bissonnette may have become tired of the ambient cliché, which is one of the reasons why Essays In Idleness is so refreshing. Essays In Idleness revolves around a self-built analogue synthesizer, which in turn gives the music a bright-eyed focus. His ambient music is still exactly that, but it has a renewed tonal clarity that shines like an emerald jewel.

‘Greenish In Its Light’ is a spacious canopy of electronic sound, a dense electronic rainforest soaked in vitality. Electronic chirps call out from the treetops, one after another. Their voices sing a unique dialect, broadly smeared across the octaves. ‘A Deplorable Corrupt’ chooses to snake its way around the track, with hissing tones that overlap and then writhe slowly over the music. It is a chant, a half open gateway that leads to an ambient paradise. The transparent tones are left to lovingly linger as they explore the expanse. Listen after listen reveals its precious beauty. Harmonies disappear just as they’re about to develop, replaced by another lucid tone.

The music is experimental, with the focus on chance, risk and error creating a beautifully natural, organic sound. It’s naturally shaped, jetting out a curve of light that came out of Bissonnette’s own reflections. The synths are fresh bursts of mountain air and mirror his own crystal clear approach, but it has to be said that the music is often left to its own devices, allowed to spontaneously shoot up and then develop until it finally diminishes. In this sense, Bissonnette is there to oversee the music like a caring father to his child. Bissonnette taps into a narrow vein; a single, precise theme that gives the music a beautiful clarity. He abstains from the varied use of timbres, averting the modern ambient sound. In doing so, he has flipped the coin and the preconceptions, revealing another side to ambient music’s glimmer of infinite warmth. He has the vision and the execution to produce stunning music, no matter the source. Everything else has vanished. The forests stand quiet, with the sound of the wind the only kind of music. It’s an instrumental loneliness, the new outcast. This is the reason for its expansive sound; the unusual contradiction of expansion via contraction.

The tones warp gently, as if they were twenty year old tape reels, slowly awakening to the sound of another era. Despite the synthesizer’s age, the synth itself never feels dated. Instead, it points to the future, of endless days and nights ahead of them. Intentionally or not, the music is meditative and cool, bordering on icy. The futuristic ‘Another Moving Sight’ oscillates against an ever moving line of synth, and sweeping electronics skate over the smooth surface. At other times, the synths scream out as if vocalizing their current disapproval. ‘Wasting A Little Time’ is thoughtful and playful at the same time, and with the coda Bissonnette has made us all aware of the current climate. He creates moods that are just as peaceful as the aforementioned ambience, and there’s nothing to stop other artists going on a new adventure. It’s a stunning album, its snaking lines of synth radiating with inner warmth, its prism reflecting a thousand sharp colours.